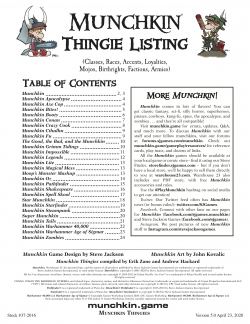 Many, many years ago, when we only had a handful of Munchkin games and expansions, Erik Zane compiled a list of all the character abilities (Class, Race, etc.) for every Munchkin set then available, and called it Munchkin Thingies because of course he did.

Erik, you created a monster. And not the good kind that gives levels and Treasures.

Since then, we've tried to keep this up to date with every new release from SJ Games that includes more "thingies." When we get busy, alas, sometimes the Thingies file falls out of date, and that's what happened over the last (checks) (wow) two years. Oops. Fortunately, we were able to steal a bit of Alex's time last week, and with his help we brought this back up to speed, including everything up through Munchkin Tails. Munchkins & Mazes and the third Munchkin Warhammer Age of Sigmar expansion will be added when they're closer to their release dates.

A couple of notes: We don't list Powers and other similar abilities because that would make this already long PDF much, much longer. And non-SJ Games Munchkin games aren't included.

You can download version 5.0 of Munchkin Thingies from Warehouse 23 right now. And if you have a Warehouse 23 account, you'll get an update every time we update this file! We promise it won't be two years before the next one.