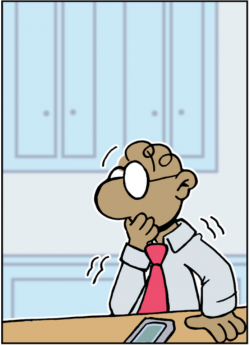 There are many, many reasons I'm proud to have worked with John Kovalic on dozens of Munchkin products covering thousands of cards.

But one of the most important is his raw humanity, especially when we're enduring times like right now.

Dork Tower has always had Ken in its cast – often the straight man for the humor of Igor, Carson, and Matt, but he's had his own jokes and story lines over the years. Ken has always been a part of Munchkin as well (although not appearing as frequently as some of the other characters, which is probably something John and I need to talk about). This week, I'm directing everyone to John's current story line featuring Ken (the image at the right leads to the first page; click Next to read from there) and I am extremely sorry that it's both so relevant and so necessary.

Hopefully, by the time the next Munchkin News goes live, I'll have news about a silly card game that's worth sharing, something that can made you and me smile. I'm not smiling at a whole lot right now.