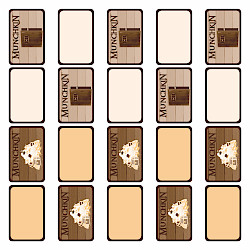 That’s the current number of total Munchkin cards in our database. I’ve removed the cards that were written but never ended up making it into a set, and I’ve added all the third-party cards written by our officially licensed partners. Some of these cards are in sets that haven’t been released yet, and there are still more cards that are written but not in either database.

I did not remove the duplicate cards. At roughly two Cheat! cards per set, there are something like 200 of them across Munchkin. Still, that doesn’t detract from the feat of writing that many cards!

That comes out to almost 640 Munchkin cards every year for 20 years.

I’m proud to say that I’ve been a part of that for nearly eight years now, and we have no plans of slowing down any time soon!