Fortunately, we had an idea, suggested by many fans over the years: a set based on myths and legends. Our Target buyer was very supportive of this suggestion (whew!), so Steve and I bashed out some card names and then I went into my Munchkin Cave Of Writing Solitude to start fleshing out the set.

Everything Old Is New Again

One of the decisions Steve and I made early on was that this would be a fantasy-themed set using the card design from the original Munchkin game, rather than creating a new Legends-specific look for the game. We had a couple of reasons for this:

Having decided to use the fantasy design, the next question was whether we wanted to write new roles (Classes and Races). We went back and forth on this question for a while before deciding to use the original Munchkin roles. As with the card design, the primary reasons for this were compatibility and ease of development. And giving fans a design similar to a game they already knew meant the learning curve was much shallower . . . so they could just open the box and start playing! 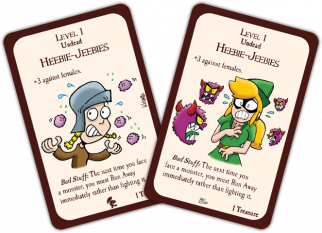 Once we nailed down the general shape of the set, it was time to put some meat on the skeleton. We've built a pretty good general framework for what goes into a new Munchkin game over the years, and I leaned heavily on that as I worked on the first draft of Munchkin Legends.

Steve and I had settled on a mix of ancient and modern legends. My first draft delved deeply into mythic tales from around the world. Steve saw that and commented that while the list of monsters was certainly educational, and some of the monsters were fun, it wasn't Munchkin. So I went back to the drawing board, cut out anything that I decided was in there for breadth rather than fun factor (Qallupilluit and Ashiarai Yashiki, we hardly knew ye!), and came up with a far more accessible and, yes, Munchkin-friendly list. Fortunately, some of the monsters I bounced found their way into the Legends expansions (for example, The Wild Hunt in Faun and Games and Baykok in Myth Prints), and I hold out hope that some of the rest will get their day in the sun in the future.

My sense of modern legends was more on target, and nasties like Slender Man, Sewer Gators, and even the Heebie-Jeebies got the Munchkin treatment they had so long deserved. (In working on this very article, I finally realized that I missed an opportunity by not including Creepy Pasta, either as a monster or a Treasure. I may have to rectify that oversight . . .) 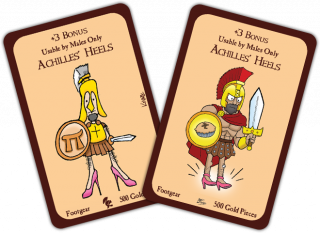 Writing the Treasures was just as harrowing. There were so many magic items from around the world that I wanted to include, and not nearly enough cards in this set to use them all. Additionally, many of those legendary treasures are weapons, and so I was scrambling to find armor, headgear, and footgear – especially footgear. Turns out, there aren't that many well-known magical shoes, and we'd already done many of them. (Having said that, I am very proud of Achilles' Heels, not least because of the slightly disturbing art John drew for it.)

Ultimately, between exhaustive research and some word association games, I was able to put together a list of magical loot that made Steve and me happy and still fulfilled my goal of mixing ancient and modern legends. (One example of a modern legend, Candy and Cola, was a late and very welcome addition to the game. I can't believe we almost missed that one!) 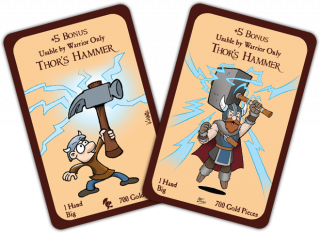 During this process of locking down the card list, John was hard at work drawing. As usual, his efforts polished many of the cards to a sparkle, and some of the cards wouldn't be nearly as funny without his contribution. Case in point: Thor's Hammer, which was an obvious card to include but doesn't really become a Munchkin card until you see the art.

John deserves special commendation for starting work so early in the process that we ended up with at least a dozen illustrations for cards that were cut from the game. We hate asking John to do work that ends up not being used (although we almost always find a way to use it eventually), and want to thank him for going above and beyond with Munchkin Legends.

The Legends Live On

It was always part of the plan to have a Legends expansion ready to go when the Legends core game went into full hobby distribution. We actually ended up splitting the expansion into two smaller expansions, one focused on the new Race (Faun) and one on the new Class (Gladiator). That makes these expansions independent of each other and, not coincidentally, also makes them good expansions for the original Munchkin game even if people have missed Legends. Or, ideally, people could buy two copies and expand both of their games! 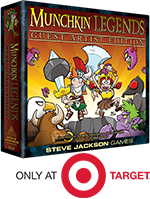