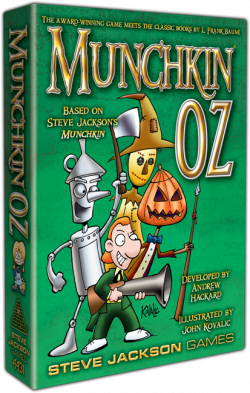 Last week, we posted the Star Munchkin 3 Designer's Notes. This week, we're peeking behind the curtain to look at all the secrets of another new game: Munchkin Oz. Adapting these classic stories to Munchkin was one of the most fun challenges I've faced in my time as Czar, and this article gives you a look at some of them, including the reasons why several things that seemed like obvious design choices at the start ended up not working at all. It also peeks at several cards from the game and discusses several others.

After you read the article, why not come discuss it on the Munchkin forum?

(You can also read John Kovalic's thoughts about Munchkin Oz in the September 25 Daily Illuminator, and you should, because they're great.)

(For even more bonus Oz content, pick up issue #9 of the Munchkin comic from BOOM! Studios; there's a six-page Oz backup story illustrated by Mike Luckas and written by, um, me. Find out what happens when Spyke and Flower meet some real Munchkins . . .)

In the following Designer's Notes, Munchkin Line Editor Andrew Hackard talks about the design process for the original Munchkin Oz. Our Oz-related work has expanded since we published that game. Now we also have Munchkin Oz Guest Artist Edition and Munchkin Oz 2 ‐ Yellow Brick Raid

We have been talking semi-seriously about an Oz game for Munchkin for several years. (It makes sense, considering where the term "munchkin" came from.) Unfortunately, it had never been at the top of the list of Munchkin games we wanted to write. In the fall of 2014, the talk became very serious; we had a spot on the schedule for a new Munchkin set and, for the first time, Ozwas the best set to fill that hole.

Of course, deciding to publish a game and being ready to publish that game are very different things. Once we put Munchkin Oz on the schedule, it was time to start writing.

Step One: Do Some Book Learnin' 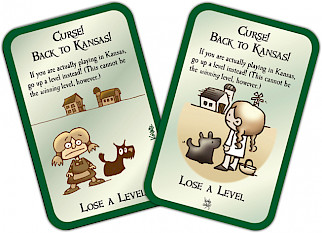 We knew from the outset that Munchkin Oz was going to be based on the original 14 L. Frank Baum novels, rather than any of the movies made from his work or any of the sequel novels written by other authors. (A bit of trivia: The best-known movie, The Wizard of Oz starring Judy Garland and others, was the fourth version of the book to be filmed. There were three other versions before that: a 13-minute short that seemed to come from the turn-of-the-century musical play, a full-length 1925 movie that diverged fairly radically from the book and bankrupted its studio, and a 1933 nine-minute short film that combined black-and-white and color footage but did not see release until 2005 because of legal problems) I had read the first two books, The Wonderful Wizard of Oz and The Magical Land of Oz, as a child, but they were far from fresh in my mind, and I had never read the remaining stories.

I was in for a treat.

Considering that these books were written for children over a century ago, they hold up surprisingly well. They rarely bog down in extensive description, letting the action carry the story; they have brilliantly written characters; and they are just plain fun. Baum delights in wordplay, which provided a rich vein to mine when it came time to write cards for Munchkin Oz. Some of the jokes in that set are lifted wholesale from the Baum canon.

However, I did run into some surprising problems.

Perhaps most surprising was the lack of description of the four main people of Oz: the Gillikins, the Quadlings, the Winkies, and the Munchkins themselves. Other than referring to their signature colored clothing and architecture, Baum doesn't give any real distinguishing characteristics of these people at all, beyond a description of a typical Munchkin hat. From a storytelling perspective, this makes them much easier for young readers to imagine – too much detail can obfuscate rather than clarify – but it makes it much harder to use them in a game context. My original plan was to use these four people as the Races in Munchkin Oz, but that proved to be unworkable based on the information in the novels. Anything I created to distinguish them would have gone against someone's "head canon," so I reluctantly let that plan go.

Sticking with the Classics . . . I Mean Classes

Fortunately, coming up with Classes to use was much easier. Obviously, Wizards had to be included; if you don't have Wizards, you don't have Oz stories. Once I decided to use one Class from previously published material, I realized there were other Classes I could incorporate into Munchkin Oz and save myself some development work. This critical decision probably saved me a week of thinking about new Classes, a week that it turned out I didn't have to spare.

In reading the stories, several archetypes stood out, and in the end I borrowed the Professor from Munchkin Cthulhu, the Soldier from Munchkin Axe Cop, and (with the kind permission of USAopoly) Royalty from Munchkin Adventure Time. As one of their developers pointed out, they had borrowed the Wizard for that set, so there was a pleasing symmetry in this request. 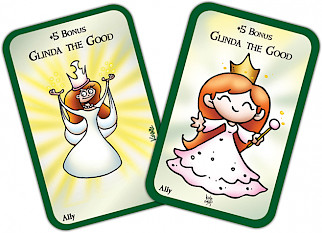 We also briefly flirted with the idea of including character cards – an idea first used in Munchkin Adventure Time – before deciding that monsters being able to kill Dorothy, Ozma, or the Scarecrow was not quite in the spirit of the original books. Instead, we took many of the iconic heroes in the stories and made them into Allies, letting us use another established game mechanic to make sure that Munchkin Oz felt like a real Munchkin game while still having a lot of distinctive Oz "flavor." The Ally mechanic is also key to the Soldier and Royalty classes, so it worked out very well, all things considered. 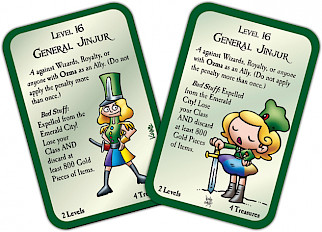 Bring on the Monsters

You cannot have a Munchkin game without a good assortment of monsters to fight, and Baum's books have no shortage of horrid nasties to fight. From the Hoppers and Horners to the vile Yoop, the Oz adventures teem with malevolent do-no-gooders. And I confess that we had a little fun of our own, with critters like the Oztrich showing up to surprise even the biggest fans of the Oz books.

One decision that I made in building this set will probably surprise people who know Oz from the movies, not the books: the Wicked Witch of the West is not the Level 20 "big bad." (Don't feel too bad for her; she's Level 19 and awfully nasty.) Yes, the Wicked Witch is the main adversary in the first and most famous Oz book, but after Dorothy kills her with a convenient bucket of water (spoiler alert!), she's gone. The only foe that recurs in several Oz stories is the Nome King, who is a truly nasty piece of work indeed, and even drove our heroes out of the Emerald City in one book. The Nome King has definitely earned his place as the most fearsome monster in Munchkin Oz. 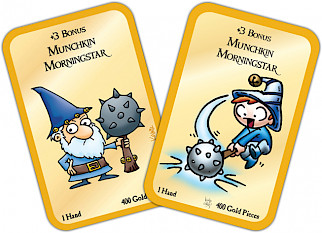 What's an adventure story without fantastic magical treasures? We kick off the discussion, literally, with the Silver Shoes, originally worn by the Wicked Witch of the East and given to Dorothy in her first adventure in Oz. (You thought those were ruby slippers? Not in the book! . . . but we also included Some Random Non-Canon Shoes for you movie lovers.) Of course, your hero can get Brains, Courage, or Heart. We picked some fan-favorite items, such as the Woodsman's Axe and Glinda's Book of Records, and we also created some of our own, including the Oz Bodkins and the Baumstick. And, as in any great children's story, Oz Well That Ends Well! 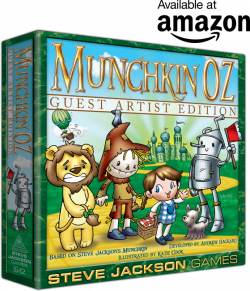 Katie Cook's Munchkin Oz Guest Artist Edition has the same set of 168 great cards, illustrated in her distinctive style. This Deluxe game is a limited edition, so get it exclusively at Amazon.com while it lasts.

And you know what? Cook and Munchkin Oz is a match made in heaven. (Or in Oz. Or both.) We say that because Cook was drawing Oz-related fan art for years before we ever worked with her on this set. She sometimes would show off this Oz art at conventions with the rest of her illustrations, and that's how Munchkin Line Editor Andrew Hackard got the idea that we should share her vision for Oz with the rest of the world through the Munchkin Oz Guest Artist Edition. We think that's extremely neat! It's wonderful to see an artist's love for a series of books result in a project like this.